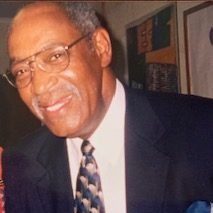 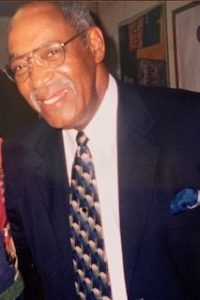 Frank Irvin Terrell, age 80, was born in Knoxville, TN on October 13, 1940 to the late William and Catherine “Mama Cat” Mallory Terrell. He peacefully departed this life on February 18, 2021 after courageously putting up a good fight against a lengthy illness.

Frank grew up in Knoxville and was an avid sportsman as was displayed in his talented baseball abilities. After graduating from Austin High School in 1958, he attended Tennessee Agricultural and Industrial State College, now known as, Tennessee State University. There he played baseball for the “Tigers” on an athletic scholarship.

In 1963 he was drafted into the United States Army and was stationed abroad in Germany as a member of the infantry earning a marksman’s medal. While overseas he was again able to use his baseball talents by securing the lead catcher position on the Army team. This baseball team would play games against various teams across Europe.

Frank loved the Lord and professed his faith in Christ. He was a long-time member of Mount Calvary Baptist Church and later would join Martin Chapel United Methodist Church, serving in various roles such as singing in the choir, setting up for Communion, cutting the church grass, etc. He loved spending time doing these tasks for his church family while serving the Lord.

Not only was Frank a fantastic baseball player, but he enjoyed many athletic activities including golf, fishing, bowling, and basketball. His love of sports provided him with various opportunities such as previously serving as Austin-East High School’s basketball statistician and football announcer which were two things he truly loved doing. He enjoyed spending time with friends while participating in their annual spring fishing trip to Mississippi.

Frank never met a stranger and was an outgoing person which was evident in the many people he met and knew by working for more than 25 years as a postal carrier for the United States Postal Service at various locations within Knoxville, retiring in 1992. Additionally, he was a long-time charter bus driver with over 40 years of service. The opportunity to be a charter bus driver for so many years allowed him to see the glorious landscapes across the United States from Tennessee to the New England states, to the West Coast and into Canada. His passion for driving never seemed like a job; but rather as a fun adventure.

Frank loved his family and especially enjoyed spending time with them while attending the Annual Mallory-Stamps Family Reunion. He always had a joke in his pocket to tell you while having a toothpick in his mouth or behind his ear!

Frank united in holy matrimony to his soulmate, Carol Morris Terrell, and to this union two children were born: Shawn and LaTosha. Unfortunately, due to their untimely illnesses, both Carol and Shawn preceded Frank in death. Later in life, Frank would have a chance to earn the love of a Godly helpmate in his 20-year union to Leezetta Spears Jones Terrell.

He ran a good race and fought a good fight even when his body was failing. He always would say “I don’t have a hurt in this world and if the doctors can learn from me, then maybe his children, grandchildren, and others would be spared from this illness.” He believed God allowed him to go through this illness to serve as a testimony for others as the life span for the disease was a short duration, but he lived over 16 years after his diagnosis. He would say “God has been good to me.”

One thing he wants all his family to learn from his experiences is not to give up, strive to do and be better because all things are possible through Christ.

Special thanks to Dr. Hesamm Gharavi and all the special nurses and care givers at Tennessee Cancer Specialists; Dr. Suresh Kumar and his colleagues at Renal Medical Associates, and Dr. Donald Parker and his team with Summit Medical Group.

In lieu of flowers, donations can be made in Frank’s memory to Martin Chapel United Methodist Church, 1746 Ohio Ave., Knoxville, TN 37921. 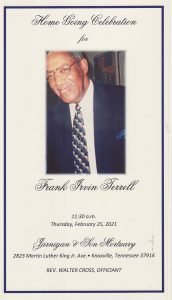 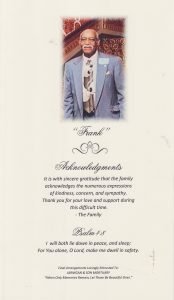 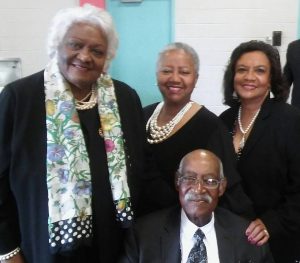 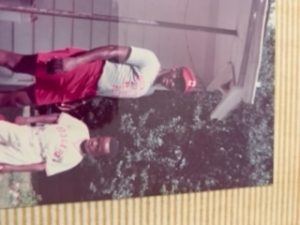 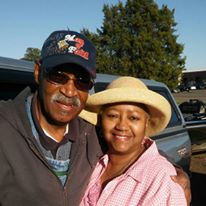 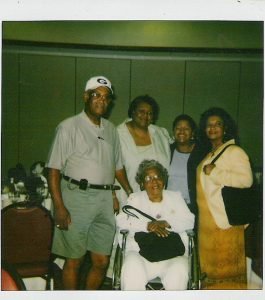 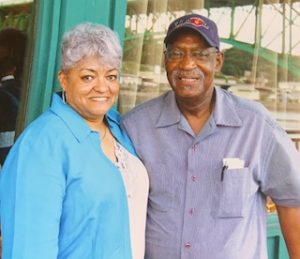 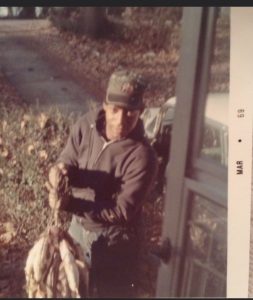