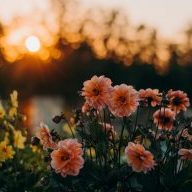 On April 4th, 2021 (Easter Sunday) George W. Tate a loving son, brother, father, former husband, uncle, grandfather and great grandfather passed away at age 90. George better known as Mr. Tate was born October 23, 1931 in Mascot, TN to Robert Tate and Grace Moulden. As the oldest son he joined the Army to help his family during the Korean War, when he returned home, he worked for Vester’s Florist, then moved forward to retire from Roman Hoss in 1981.

George Tate was married and divorced Margaret Thompson and June 7, 1961 she had his only child. George had a passion for fine cars, mostly Cadillac Deville’s, an acquired taste for jazz music like BB King, Ray Charles, etc. He was known for his quick wit, passion for order, cleanliness, neat style, compassion for family and friends, but most of all for having a deep voice at an incredibly young age. Even though he was short he never let it get in his way of life. His compassionate spirit lifted everyone he touched.

George was preceded in death by mother, father, siblings, ex-wife and co-workers as well.
Survived by only daughter Damita Jo Tate who blessed him with beautiful granddaughter’s Marichino Sheria Jones and Heaven Leigh Grace Hickson whom also blessed him with great- grandchildren; Sherman Johnson Bess III “Lil Man,” Angel Lee Bess, Twins Kashar and Keymini Hickson; a host of other family members and close friends too big to name. 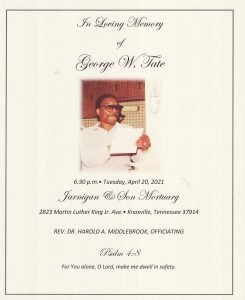